I've been researching floating homes since about Jan 2017. Now it's August 2017 and I'm ready to start something.

Clearly, the most important thing with anything is the foundation.

I've looked into many different types and have taken some time to try to decide what will work best for me, my situation and goals.

Erin Kaiser built her floating tiny home with pontoons (littlehouseontheharbor.com). Not something I wanted to deal with so I looked elsewhere...

This was a great solid option...I even found one within my budget and could have started on the actual home building.... However it was in BC, Canada and to inspect it and ship it out would have cost way more than the barge itself. Bummer. So next option...

I  priced  out docks but they would have cost about as much as the barge...Might as well get the barge!

I bought a book called Handmade House Boats and it's number one recommendation for floats were affordable, reuse of long lasting HDPE (high density polyethylene) 55 gal drums. Accessible, easy to repair/replace, reusing stuff for earth friendliness, and affordable....So that's what I did! 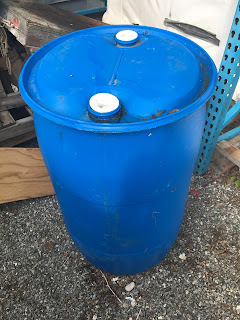 I purchased the first eight from a local marina pretty cheap, but I had to repair holes in them. 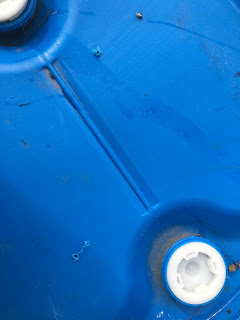 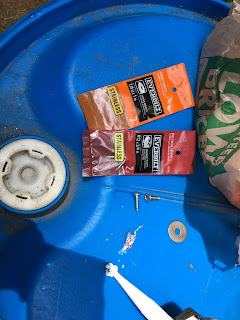 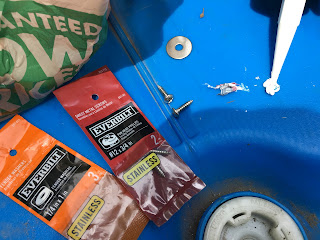 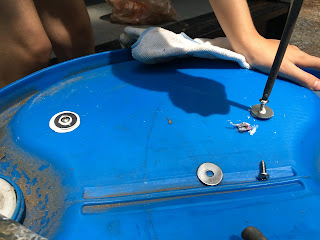 I got other barrels free/cheap from car washes and bought some a bit more expensive but in beautiful shape and cleaned three times on Craig's list. Over all the barrels cost (between free, $8, $12, and $20) averaged out to about $13 per barrel. I'm planning to use 28 barrels for the layout. (For those far from a calculator that would be about $361.70 USD for flotation alone - keeping costs down...that's one of my goals!).

Estimating about 250 lbs of flotation at half buoyancy times the 28 barrels I should be able to support around 7,000 lbs....supporting the weight of my dreams.