I only had one task in mind today.
Something I realised I could do mostly on my own if I just put some time and effort in.
The task broke down into the following steps:

It seemed pretty straight forward seeing the basic steps like this.... Only, like always, the were some issues right from the start.
I aimed to simply get the beans into place... Check... Step one of six complete!

I actually felt pretty good at the small victory as it was at least two things (ordering and picking up beams and putting them in place) I could do without relying on someone else and delaying this even longer...so, accepted as progress for sure!

But then issues arose. 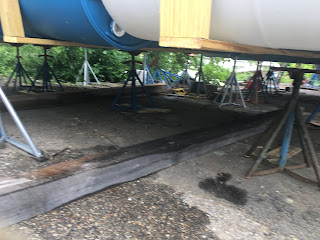 The smallest jack stands in the yard measure around 29 inches... The slow in the ground below the structure proved to be over 29 inches on one side and well below that on the other side. I put a few stands in nearby locations and spent an hour or so slowly raising it by turning each Jack I could a few turns at a time song in a series. I was thrilled that I was even able to turn then at all! It gave me some more encouragement that even if progress was slow and done in millimeter increments...I'd take it!


Of course, this not being the professional way to do it, the deck has become unlevel again...but, I've already seen how it can settle over time and have no other options at the moment. The sliding door still works fine and that is usually what is impacted the most.

After almost two hours of working on it and still being shy an inch on one side...I decided to move the stand into a place where it would actually fit and still be able to support the beam. After a little while of struggling to get it into place with buckets and rope...I realized I could continue to struggle for hours on my own or quickly and easily get it in place with another set of hands. So, I begged Cambyr (my 13-year-old) to come over and lend her two hands. Luckily, she eagerly agreed and we had it in place in 5 min! I temporarily added a bucket with a pre-cut block lying around the yard to support the low end...my task for tomorrow...raise it up enough to get the smallest jack under it....about one more inch to go and I can secure the whole thing to the structure and move on to the next problem to solve.

I have to say thanks again, to all the FB friends who responded so kindly to my "I need a hug" request! (something I never would have even thought to do, but so glad I opened up to community...being vulnerable...and directly asking for what it was I really needed and wanted.

It helped me get through the disappointment of not being able to launch yesterday as well as give me more encouragement to fire myself up and figure out what I could do to get this going on my own.

The support has been invaluable...I couldn't have done it without you all!

Email ThisBlogThis!Share to TwitterShare to FacebookShare to Pinterest
Labels: flotation