adding the second beam - making a new row of drops

Today I was determined to get the second beam in place...doing that would ensure I could get in the water sometime next week (marina willing).

So, I got out first thing and prepared for a long day of hard labor!

I was relieved when I got to the structure and had time to sit with my chickweed juice and lay down on the beam and assess my situation. I planned to pull apart one row of barrels in order to put the drops in, but the more I studied things from this perspective, the more I saw a clearer and better answer.

I noticed the cross beams above me and how they seemed to line up perfectly with the area the drops should be...it's almost as if I had planned it all along...I probably did, since the universe has led this whole expedition anyway...it had way better foresight than I did!

Suddenly, I KNEW I'd have this beam on today and I was so excited I got really efficiently down to work... 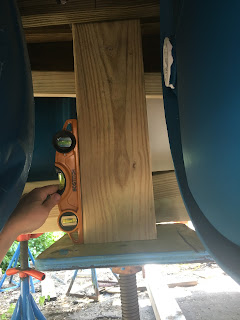 I used a trick I learned in my apprenticeship that made installing the drops a piece of cake...just measured the distance from the previous row's drops and used the level to make sure it was square...the trick was to simply use the jack stand to hold the board in place to make it less awkward to line everything up correctly.


It worked out great! I was able to swiftly install 6 drops quite well this way and only a couple of small redo's at the beginning when I realized my measurements were off a bit. 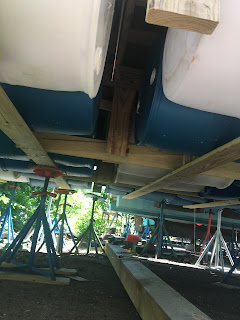 Overall, THRILLED that this worked out without having to undo a row of barrels
With the drops in place I used jack stands to secure the bottom board. Once the bottom board was in place, I was able to use Cambyrs muscle power combined with my own to lift the beam to the top of the jacks and secure it into place. Didn't take much time at all...and felt amazing to see it happing so smoothly.

Cambyr stopped by so I gave her the option to practice using the saws-all to cut down the beams to size. It was so fun teaching her how to hold it with power and confidence and watch her own it.

I love being able to give her these opportunities to learn and test new skills. Grateful she will have this to draw from in the future.

It already paid off as I watched her use the hose in the backyard and notice it was broken, she immediately decided to investigate it and took out some tools and ultimately fixed it! I watched her joy and feeling of accomplishment take over her demeanor and light her up as she sprayed a working hose on the trampoline to cool off while she played! 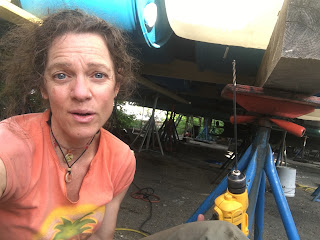 I had taken a trip to Home Depot because my local hardware store was already closed at 1pm today, and decided upon some hex bolts for the top of the drops (secured in place earlier with a couple of deck screws) and some timberlock 9-inch screws to secure the beam to the bottom board. I had to buy a long-ass drill bit to make sure it was a straight install (even though the timberlocks say they don't need predrilling).

I finished drilling all the holes in place for the timberlock but realized I didn't have the right drill bit for installing them...so that will have to be one of tomorrows tasks. 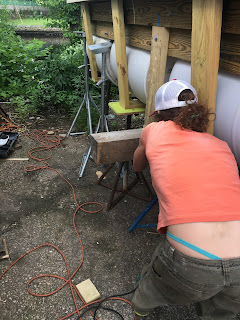 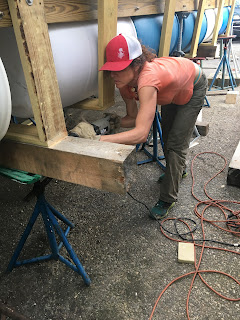 I wanted to finish cleaning up the edges of the beams so I took my turn with the saws-all and had at it....that is SOME vibration! Wow! (Cambyr helped me document my own saws all work of art!)


Tomorrow goal: finish securing the beams with timberlocks, cut the remaining 6x6" beam to secure where the lift pressure will be near the center-line of the structure, make sure the truck can fit. Once that is done I can have the marina boys inspect it all and set a launch date....again!
at June 22, 2019

Email ThisBlogThis!Share to TwitterShare to FacebookShare to Pinterest
Labels: flotation